Ram Services first became involved with the strengthening of structures using steel plate bonding method in 1984 for the M1 Brinsworth Road Bridge near Sheffield. Initial involvement was requested by South Yorkshire County Council initially during the design of strengthening process, and later to assist with supervision of work on site, when the company also supplied the epoxy adhesive. The work featured in Construction News in January 1984). 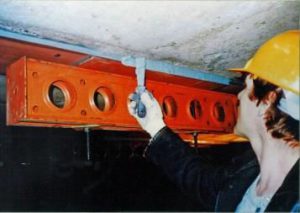 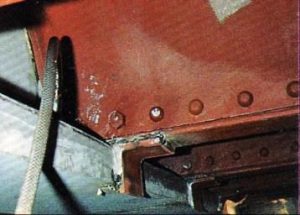 In late 1985, Ram services Limited was approached by Derbyshire County Council to discuss and carry out feasibility trials for “Injected Plate Bonding” where the preparation and positioning of the plates is undertaken ahead of the injection of the liquid epoxy adhesive.
After trials a suitable viscosity of the epoxy was attained and the project on the Stainsby-Teveral bridge below the M1 close to J29 was completed with minimal traffic disruption on the motorway above (see draft DCC report).

Following on from the above a relationship developed with engineers at Kent CC who had already commissioned a number of bridge strengthening schemes utilising plate bonding.

In early 1988 the possibility of using injected plate bonding at the A2015 Bainbridge Bridge was considered, where additional plates needed to be applied to existing fabricated and riveted steel beam flanges. It quickly became apparent that there were a number of advantages of using resin bonded plates compared to welding, and Ram Services completed the strengthening with resin bonded plates in November 1988. (This scheme featured in New Civil Engineer in March 1989).

Since 1988 Ram Services strengthened three trunk road bridges in Scotland, and in 1999 completed what was believed to be the first and largest bridge strengthening scheme using carbon fibre plates for the UK Highways Agency (A34/M60 Barnes Bridge outside Manchester). The company’s involvement included design of the strengthening, for which earlier collaborations were renewed with the use of former Kent CC engineering staff.

Plate bonding is equally suitable for strengthening other structure types, and Ram Services have completed a range of such schemes, including an office building on Cardiff, a library building in Stoke on Trent for Staffordshire County Council, an underground pumping station in Manchester, and to minor culverts and stream crossings in Anglesey, Cumbria and North Yorkshire.