Since creation in 1980, Ram Services Limited technical staff have developed a wide variety of specialist techniques and capabilities specifically to address needs identified in the civil structural repair and refurbishment sector.

These have included structural repair innovation such as;

Ram Services now routinely use a specially formulated elastomeric resin based repair mortar system to repair cracks and failing expansion joints in the concrete perimeter walls of circular water treatment settlement tanks, where scraper bridge mechanisms running on the walls cause frequent break up of the concrete running surface, which leads to plant breakdown and reduced treatment capability.  Experience over many years has shown that conventional cementitious and epoxy resin based repair compounds are not durable under the transient loading imposed by scraper bridges, leading to development of the Proflex 60 mortar system currently in use.   This material is less stiff/rigid than other repair compounds, and is able to absorb stresses and avoid damage to surrounding concrete as scraper bridges transit around their settlement tanks.  Proflex 60 has a high strength and is fast curing, allowing a prompt return to service for settlement tanks following repair. 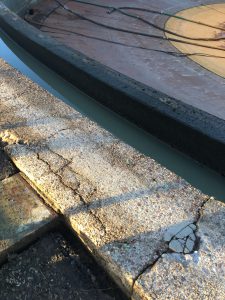 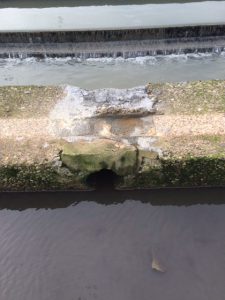 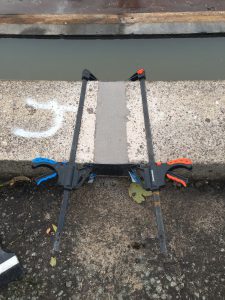 At a wastewater treatment works in the north-west, Ram Services were asked to undertake repair to a degraded concrete slab over deep open shafts between two sewage digesters.  It quickly became apparent that the concrete was in poor condition, and that repair work would be complex, hazardous and time consuming because of the elevated location and surrounding environment.

The project team looked for other options and developed a plan to replace the damaged roof slabs using a bespoke precast concrete solution.  The new slab was formed off site in a just two sections, complete with hatch openings to access the shafts beneath where needed, open mesh steel covers and pre-fixed perimeter guard rails, and lifted into place by crane, saving considerable time and yielding a highly effective and “added value” solution. 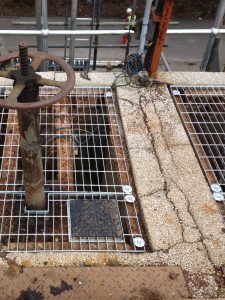 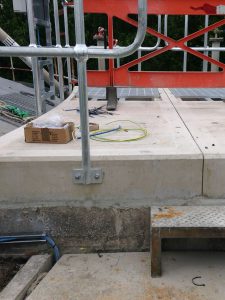 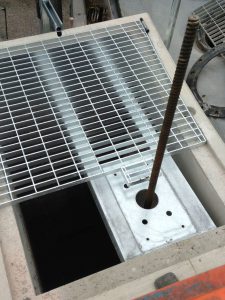 Ram Services first became involved with the strengthening of structures using steel plate bonding method in 1984 for the M1 Brinsworth Road Bridge near Sheffield.  Initial involvement was requested by South Yorkshire County Council initially during the design of strengthening process, and later to assist with supervision of work on site, when the company also supplied the epoxy adhesive.  The work featured in Construction News in January 1984.

In late 1985, Ram Services Limited was approached by Derbyshire County Council to discuss and carry out feasibility trials for “Injected Plate Bonding” where the preparation and positioning of the plates is undertaken ahead of the injection of the liquid epoxy adhesive.

After trials a suitable viscosity of the epoxy was attained and the project on the Stainsby-Teveral bridge below the M1 close to J29 was completed with minimal traffic disruption on the motorway above.

Following on from the above, a relationship developed with engineers at Kent CC who had already commissioned a number of bridge strengthening schemes utilising plate bonding.  In early 1988 the possibility of using injected plate bonding at the A2015 Bainbridge Bridge was considered, where additional plates needed to be applied to existing fabricated and riveted steel beam flanges.  It quickly became apparent that there were a number of advantages to using resin bonded plates compared to welding, and Ram Services completed the strengthening with resin bonded plates in November 1988.  This scheme featured in New Civil Engineer in March 1989.

As a further development of repair techniques applicable to water treatment and process settlement tanks, Ram Services recognised that for some structures, degradation due to poor construction, long term exposure to weather  or mechanical damage from scraper bridge operation can be severe enough to render localised repair using products such as Proflex 60 unsuitable.

A refurbishment process has been developed combining the company’s expertise in diamond sawing and structural repair innovation to remove the degraded top sections of settlement tank walls and replace them with purpose made highly durable precast concrete copings, placed onto a high strength bedding and mechanically anchored in placed.

The approach was developed to address degraded concrete scraper bridge running surfaces, but is equally applicable to situations where steel plate or steel rail running surfaces do not work effectively. 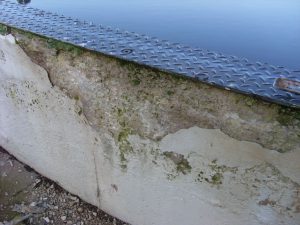 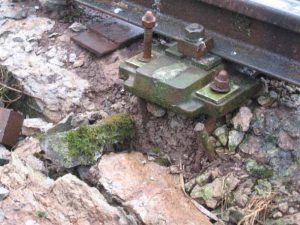 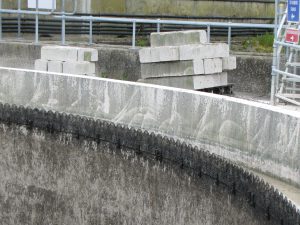 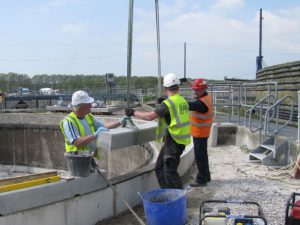 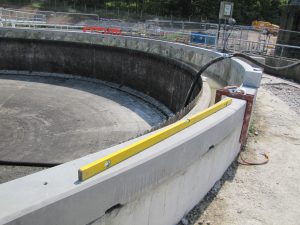 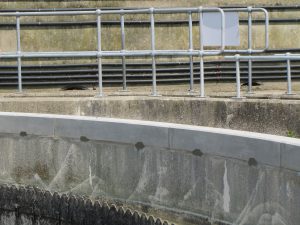 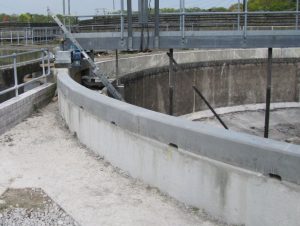 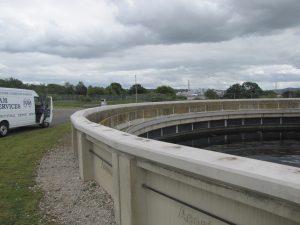